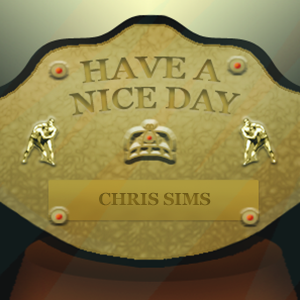 This week, I’m joined by a very special guest! One of my favourite people on the internet, ComicsAlliance’s Chris Sims joins me for an extra-special, ninety minute(!) edition of the podcast, and we go all over the place, talking about Sting, Daniel Bryan, Jushin “Thunder” Liger, Bo Dallas, the difference between the Stunner and the Diamond Cutter, Goldust, and the book where Torrie Wilson and Batista are wrestlers by night, international spies by later that night.

You can stream the show on Libsyn, or press play on that handy little button. We’re now on iTunes, so if you want to go through and subscribe/review, that’d be lovely.

In between episodes, check out Have A Nice Day on Tumblr, where I’ll be posting videos, pictures and quotes to do with the week’s episode.

If you’ve got an idea for a show, or have something you’d like to talk about on the show, just reach out and we’ll chat. You can email me anytime.

Kieran Shiach and Helena Hart make podcasts and this is where you can find them.